After midnight on January 7th, 2017 – An Angelica visitation and dream 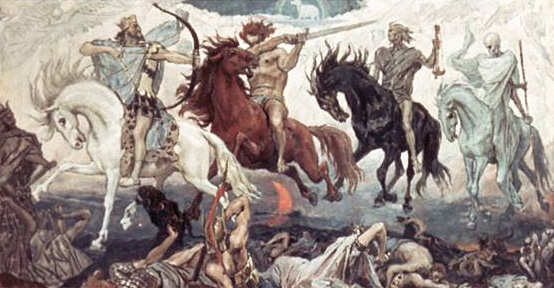 I became so hot while sleeping that I was awakened. I opened my eyes to see what I believe was the “Angel of Death” standing before me in the corner of my bedroom. I heard the Angel speak to me “Woe to the inhabitants of the earth.”

I felt the strong presence of the Lord. Holy Spirit then said “You have been called to see that which is coming upon the earth.”

My eyes were so heavy I couldn’t keep them open. I said yes in my head to this but was so tired that I fell back asleep. I was awakened again just before 3am, again being so hot that I was physically uncomfortable. As I was waking up an image came before me like it was being projected from a spotlight. It was of two coins, each with the silhouette of a face (like the look of nickels), coming together from the left and right to meet in the middle, and then the shape of a V came down from the top to touch them. It wasn’t just a V but I immediately thought the V shape was like an upside-down pyramid. I didn’t understand until I was fully awake that this pyramid represented the pyramid with the all-seeing eye that we see on the dollar bills, but turned upside down.

I was so thirsty that I got up to get a drink. I checked the temperature in our house and found that it is normal, so that I knew that the heat I was feeling was supernatural. I went back to bed.

I heard the Lord instruct me to go back to sleep. This surprised me because usually when I am awakened like this He instructs me to write what He has to say.

I closed my eyes to go back to sleep but my head swam with things of the world. I felt a presence touch me which made me jump a little and caused me to roll over to face the side of my bed. I still felt the supernatural presence of the spiritual realm. Eventually, my heart settled down. Then I heard an instruction to “go up”.

At first I thought I was to get up to go to my closet to write, but then it was like I was seeing in a closed vision two girls standing together. The first was perhaps young teens and the second was 8 or 9. The older girl was leading the younger girl. I watched the two of them walk to a large door around a corner. When they opened the door I became one of the girls, the younger I think. I entered this great and magnificent hall. It was expansive and ornate with gold lining the walls. Everything glowed with a brightness. At first I saw a flowing staircase downward that led to an open cavern with windows. I walked down to the windows to look out. I saw that this hall must be located in the heavenlies because outside the widows was this deep blue color of outer space and round looking planets off in a distance.

Then my attention was drawn back into the hall. I walked back up the steps and looked up to see a podium perched a top another high spiraling open staircase. It reminded me of a lecturn in a church. My eyes were then drawn upward and to the left to an even higher podium facing me. Behind it I saw a creature that first looked like a lion (without a mane) whose head was down and facing away so that I was seeing its left profile. It then raised its head up and swung it to the left and it was as if it transformed into an eagle. The head of the eagle could then be seen looking out over the great hall. I thought that the eagle was going to begin to speak.

I opened my eyes and grabbed my journal to write all the details down that I had just experienced because I felt they were important to not forget. I then closed my eyes again. I woke in the morning without full understanding but an appreciation for the significance of the symbolism I saw, and the scriptural references that came to mind.

Here is the interpretation I’ve been given so far:

First, I was reminded of a supernatural encounter back in May of 2015:
I was sound asleep and dreaming when it was like I was nudged awake by a friend’s voice saying “and this word is for you”.
Along with her voice, I felt a second presence.

Then I heard the Holy Spirit say:

“The scroll is being opened.”
I started to open my eyes and physically saw what looked like a trillion tiny scrolls dancing in front of me forming a picture of one scroll. Eventually they dissolved as I fully woke up.
I’ve come to believe whole heartedly that the scroll the Lord was referring to is not some lesser scroll but is THE scroll that John saw the Lamb open as recorded in Revelation 6.

“And I saw when the Lamb opened one of the seals, and I heard, as it were the noise of thunder, one of the four beasts saying, Come and see. And I saw, and behold a white horse: and he that sat on him had a bow; and a crown was given unto him: and he went forth conquering, and to conquer. And when he had opened the second seal, I heard the second beast say, Come and see. And there went out another horse that was red: and power was given to him that sat thereon to take peace from the earth, and that they should kill one another: and there was given unto him a great sword. And when he had opened the third seal, I heard the third beast say, Come and see. And I beheld, and lo a black horse; and he that sat on him had a pair of balances in his hand. And I heard a voice in the midst of the four beasts say, A measure of wheat for a penny, and three measures of barley for a penny; and see thou hurt not the oil and the wine. And when he had opened the fourth seal, I heard the voice of the fourth beast say, Come and see. And I looked, and behold a pale horse: and his name that sat on him was Death, and Hell followed with him. And power was given unto them over the fourth part of the earth, to kill with sword, and with hunger, and with death, and with the beasts of the earth.

I have had one other encounter with the same presence I saw in the corner of my bedroom this night who I refer to as the Angel of Death. This was just over a year ago on January 3rd, 2016. This experience has also been on my heart because of the date given by Holy Spirit, and its potential significance next week with the meeting of the 70 nations coming against Israel.

I saw before me twirling figures as if dancing in another time with sacks on their backs. They were adorned by jewelry, fancy clothes, and had their hair done up. I was made to understand they were joyful in the Lord for having listened and prepared.
Then I heard “I am raising up the Josephs. The date the famine begins is January 16th”.

I went back to sleep, but was awakened again and saw in the spirit a huge pile of mechanical bows, but no arrows to go with them.

Then I went back to sleep again, but was awakened again and saw in the spirit as if in the corner of my room a very tall figure that appeared to be in a dark robe, who I believe is the Angel of Death. I heard, “Tell them what is coming”.
Click here for the whole story and interpretation:

I believe the Lord has a purpose in sending this same angel back to me now and speaking to me that I am called to see what will occur, and to share this message. Judgment is coming. Period. Has the Lord extended us grace and even a reprieve? I believe so, but that period is ending.

There were a few significant things from last week’s experience to examine:

1) The Angel of Death

I believe this angel is from the Lord. He did not represent evil, but instead I believe he is an angel dispatched with a particular job to do. I think Revelation 6 speaks of this in the 2nd and 4th seal.

This perplexed me at first but then the Lord directed me back to 3rd seal in Revelation 6. The two coins I saw represent the wheat for a penny and the barley for a penny. The upside down pyramid represents the broken Babylonian system that will fall. There is a famine that is coming, even upon America. However, I believe that the Lord has already positioned His “Joseph’s” for provision for His children.

3) The Lion and Eagle – These figures in the vision represent two of the 4 faces that Ezekiel and John speak about, and which are also present in Revelation 6. Again, this points to the opening of the Seals by Jesus.

“And before the throne there was a sea of glass like unto crystal: and in the midst of the throne, and round about the throne, were four beasts full of eyes before and behind. And the first beast was like a lion, and the second beast like a calf, and the third beast had a face as a man, and the fourth beast was like a flying eagle. And the four beasts had each of them six wings about him; and they were full of eyes within: and they rest not day and night, saying, Holy, holy, holy, Lord God Almighty, which was, and is, and is to come.”

For those believers that have been taught that they are going to be whisked away before these Seal judgments, this is just false. Scripture is very clear. Though we have not been appointed to God’s wrath, America will be judged for every sin and corporate abomination we have engaged in. We are a nation that has fallen far from God’s plan for us. It is time for every believer to begin to believe and preach what Jesus preached: Repent for the Kingdom of Heaven is at hand! Matthew 3:2

5 thoughts on “Woe to the Inhabitants of the Earth”