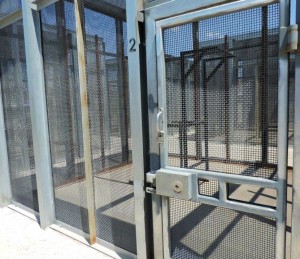 My dream: I was locked in a 2nd story cage-like room with others.  It was open to the air but had bars to prevent escape.  We knew that we were prisoners.  After a while, I went down a hallway and went downstairs for something.  I saw scary looking men coming and going from the main entrance.  Upon my return to our “cell” there were slabs of BBQ ribs all over, on the tables and chairs but also the floors.  It was really gross.  They expected us to eat.  I didn’t think of this at the time, but later I thought that it was possible that all that meat was human, and not from a pig or cow.

Our cell room became a bus that was a double-decker.  And we were somehow being transported up high above the road.  We didn’t know where we were being taken too but we were nervous.  At one point, I lowered my window in the bus to yell down at the people that were below, along the road in the town that we were passing through, that I was American.  But then I realized that they wouldn’t care that I was American.  I had the feeling that the people below didn’t care what happened to people that were transported in buses.  They must have seen it all the time.  They didn’t even raise their eyes to look.  I had the sense that we were in America but that it was not the America we know today.  Foreigners had taken over and they did not worship Jesus Christ.

We arrived at this place that looked like a junk yard or a stock yard.  There were big metal gates that had dividers so that you couldn’t see what was inside.  We got off the bus and went in.  We saw huge racking that must have been 40′ tall, all around the inside of this stockyard.  It had a netting overtop of it for a roof, that partially blocked light.  The racking was full of human bones and skulls.  It was a horrible site, but I remember not being surprised, and resigned that we were going to be killed but that then I could be in heaven with God.  They didn’t shoot us right away like I thought they would.  They had us build some more of the racking first, and also had us lay down cardboard to catch the blood and mess.  I remember praying the Lord’s Prayer with others very nervously as the time for us to be killed approached.  They asked me if I wanted to lay down or kneel or stand up.  I chose to stand, but then I thought to myself, why didn’t I just lay down since that is how my body would fall anyway.  I woke up before they killed me.

I believe this dream can be interpreted quite literally.  There is a time coming in our country when Christians and anyone coming against the “New Government” will be imprisoned and put to death.  There will be cannibalism due to a shortage of food.